History of the Concord Coachmen Chorus 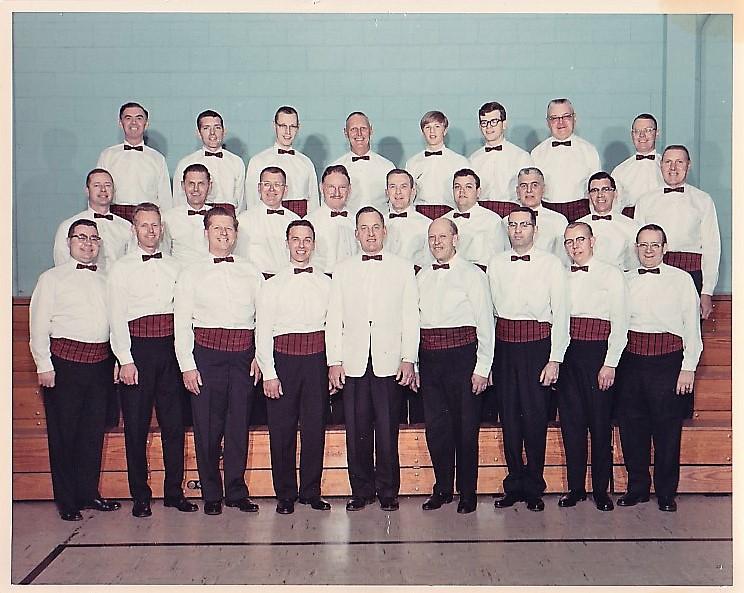 The beginnings of the Barbershop Harmony Society (BHS) (aka: SPEBSQSA) can be credited to 26 men singing on a rooftop in Tulsa, Oklahoma way back on April 11th, 1938. While we could include all the details of how this Society of ours came to be, this website is dedicated to just our own little chapter. So, if you’d like to find out more about our Society, take a few minutes and visit the BHS website to find out how it all began.

While you’re there, take some time to browse the rest of the site as it’s a treasure trove of information whether you’re a Barbershopper or just someone that’s interested in singing better while in the shower! Plus, if you're really interested in digging deep into Barbershopping, check out their new WIKI project. Just make sure that you have plenty of time on your hands as it'll be easy to lose track of time with all of the information that's available.

The Beginnings of the Concord Coachmen Chorus

Back in the fall of 1956 a group of five state employees started to organize a Barbershop chapter. It became an officially chartered chapter of SPEBSQSA on January 2nd, 1957 with the required twenty five members and incorporated in the State of New Hampshire on July 26th, 1957.

Interestingly, according to the original 1957 chapter charter, they were originally known simply as the Concord, New Hampshire chapter. The 1958 show program then lists them as the Concord Barbershop Chorus. Fast forward to the next show flyer that we have record of (1967) which finally shows them using the name that we still recognize today. A copy of our original 'Standard Chapter Constitution And By-Laws' can be read by clicking here.

James B. Jeffery was the first chorus director with weekly meetings held at the Concord YMCA. In 1964, meetings were moved to the White Park Recreation Building on High Street until 1976. The West Street Ward House was their next home until when, in 2002, the chorus moved rehearsals to the Concord Community Music School at 23 Wall St, Concord. Then, in 2011, the rehearsal venue was changed to its present location at St. John the Baptist Parish Hall, 10 School Street in Allenstown, NH.

Unfortunately, little else is known regarding the actual beginnings of the chorus as keeping historical records is seldom thought of at the beginning of any endeavor. As the last charter member, Bob Haines, passed away in 2012 all we are left with are memories told by members who joined at a later time along with a few dusty copies of old documents. 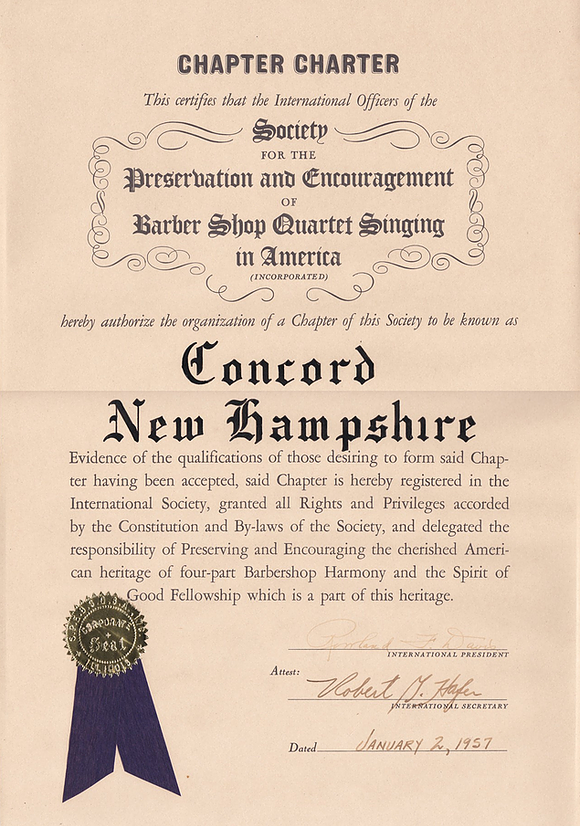 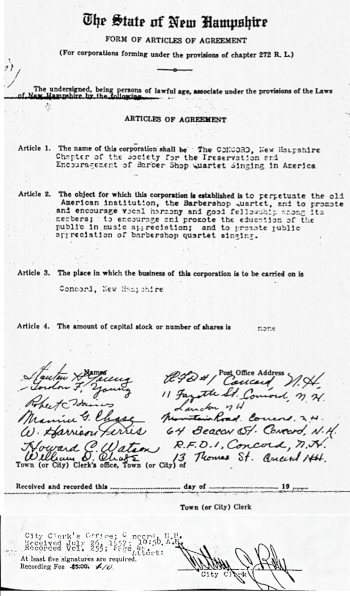 1957
Once becoming a chartered chorus on January 2nd, 1957, they decided to hold a show for the public which was held at the Capitol Theatre in Concord. The featured quartet was The Saccarappa Yappers from Portland, Maine.

1958
The very next year their second show was held at the Concord City Auditorium where tickets were being sold for a whopping $1.50 each! The 1956 International Champions, the "Confederates" from Memphis, TN were the headliners. It’s amazing to think that a chorus, only two years old, was able to share a show at home with former National Champions! To view a copy of the 1958 show program, click here.

1966
Headliners were the "Four Statesmen"

1967
This year’s show was called “Plantation Harmonies” with a minstrel show theme for the first half.

1998
Our 39th annual show was originally scheduled for Sunday, November 1st.  However, there was a bomb scare and we were prevented from going on as scheduled. After much negotiations, the show was finally presented on January 17th, 1999.

It must be noted that almost every year from 1968 until 2008 Joe McManus faithfully fulfilled the Master of Ceremonies duties. 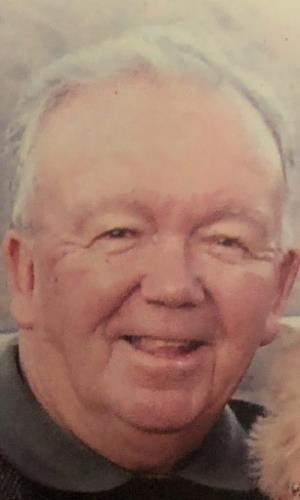 ~ As told by Joseph S. Hayden

Even into adulthood, I thought musical directors were mere hand-wavers. Then I got to sing under a few, and began to appreciate their talents and contributions. I've discovered of late all sorts of unheralded contributors to the musical world, and apologize now that I failed to notice them, much less count them as musicians. Recent to my list are the "studio geeks" who transformed analog recording of real-time performances into the digital creation of music itself. The most enduring heroes in my world remain the directors, particularly directors of amateur musicians from grade schoolers to adults; performers of all varieties, not the least of whom are Barbershoppers.

Eric Ruthenberg, the Coachmen's Music Director of 25 years (as of 2018  - ed.), is the best of the best.  I'd like to expand on that, but I was asked, as the guy with the most time in the chairs, to give some "historical" view of our Directors.  Eric is still at our musical helm (as of 2018 - ed.), thank goodness, so he is definitely not history.  And I joined up around the Coachmen's 18th birthday, so I obviously can't speak to my experience of those who came before.

Bob Richardson joined us in the early 70's.  He was one of three widely-known Barbershop brothers, one of whom, John (or "JR.") is still alive and well, and a member (with his son Todd) of the Lakes Region Chordsmen. [Ed. note: this was written in 2019] All were sons of a Laconia Barbershopper who may well have been one of the first New Hampshire-ites to take up the hobby, back in the day when Barbershoppers mostly "woodshedded" (sang by ear), and pursued the hobby by swapping hand-written arrangements.  Bob was a talented musician, and followed in his father's composer/arranger footsteps.  When I joined the chorus in the early 80's our songbook was almost entirely hand-written scores, generously populated with Bob Richardson arrangements.  He shared his talent with friends and family members in Laconia, and as a consequence the Chordsmen were the only other chorus with whom we shared repertoire.  Our camaraderie with the Laconia guys came as well from the fact that they had, some 20 years earlier, encouraged some of their Concord-area members to break out on their own, which resulted in the chartering of the mighty Concord Coachmen chapter, in 1957.

Although the compact cassette player/recorder had been introduced to the US in the mid-60's, under Bob Richardson there was little or no use of recordings. Bob the consummate musician taught notes week in a week out.  A few guys could actually read Bob's musical scratchings; the rest of us leaned in, and learned (loosely) from the learners.  I tried making tapes of a local piano teacher playing his music; that never worked well for me. Keeping up with his frequent re-writes was equally daunting.

When Bob got tired of the commute down to Concord (as well as slow learners like me), and left us in 1983 to direct his home chapter, we went through a painful 10 year period of Director Try-Outs.  They tried us out, and they left.  Those who stayed on more than a year did so more out of a love of Barbershop than love of teaching.

Notable among the "longer-term interims" was Walt Jones.  Walt was almost as imposing a figure as Richardson, and barely more tolerant of slow learners. He was blunt. Marine. Believed in forceful eye contact. But he was also a talented Barbershop director. He moved us up the musicality scale, helped by then-growing availability of Learning Cassettes from SPEBSQSA, and the resultant confidence-building among chorus members.  Walt's two adult sons, Clint and Steve, sang competitively with their father, and as they grew into the hobby themselves, also tried their hand at directing, though not with us.  Steve Jones directed the Yankee Clipper Chorus in Portsmouth, NH for almost the entire period between the legendary Jim Dodge's retirement and the ultimate folding of the Portsmouth chapter.

A couple of novice directors then entered our folds, both of whom had tremendous senses of humor (finally. thank goodness), and enough Barbershopping experience and enthusiasm to carry the Coachmen through period of "institutional insecurity" (we talked often of folding our tent).  One, George Roberts, was an old-time showman at heart, and helped us set and pursue performance goals.  He also sang in quartets with a number of us, fostering a period of active ensembles that flourished... and actually competed.  I regretted I came into George's aura too late to sing with his "Parts and Labor"; a knowing Barbershop handle that still brings a smile to my face.  George and his lovable Hedy have passed on; his grandson Heath Auger remains on our rolls, though currently inactive.

Eric Ruthenberg joined us in 1994, rescuing us from our too-long Try-Out period. 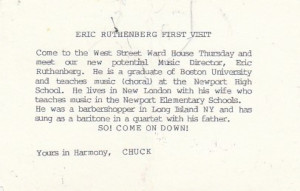 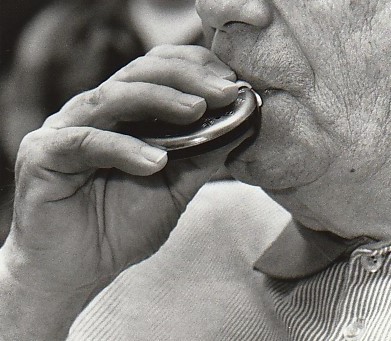 Well, there you have it – a very brief history of the Concord Coachmen Chorus. While most of the details are lost to time, we are still blessed with many photos and ephemera from throughout the years. Please take the opportunity to travel back in time with us by visiting the rest of this site. There, you’ll get to see various photos of the chorus along with pictures of different quartets. You’ll also see pictures of many of the flyers used to promote our annual shows and a page devoted to the men who have built this chorus into what it is today.

Sign up for our newsletter to receive the latest news and event postings.